The following appeared in the September 2003 edition of The Ely Ensign, on page 4

A party of eleven people from the diocese, led by the Vice Dean, canon John Inge, visited the Tanzanian Island of Zanzibar last month. Most of the group ownership at Ely cathedral, which is twinned with the island’s cathedral. Maggie Spencer-Thomas joined the party to report the third visit from Ely.

A small group of smiling faces greeted us with the Swahili words “Jambo, Karibu!” This was our first encounter as we arrived in Zanzibar’s cultural heart, Stone Town. This greeting, which means “Hello and welcome”, was one we were to hear many times during our short stay on the island.

The enthusiastic reception party grabbed our suitcases and drove us to St Monica’s Hostel, which was to be our home for the next twelve days. The Victorian building, which is situated next to the Anglican cathedral, was formerly home to the Sisters of the Cross and Passion.

During our stay, we lived alongside the vibrant but beleaguered Christina Community and met other Christians on the island, which has a predominantly (94%) Muslim population. The purpose of our visit was to learn about the cost of discipleship to Christians in Zanzibar and to support and help the people who worship at Christ Church Cathedral in some practical way. 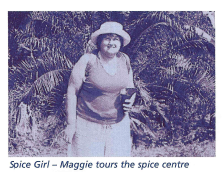 A total of £8,000 had been raised through a variety of initiatives at Ely Cathedral as a donation for the work of Zanzibar’s Anglican Cathedral. Our party also brought several useful items including a large box with tins of paint and some vestments for the choir.

Christians in Zanzibar revere the British for having been the prime movers in brining an end to the scourge of slavery and for having brought Christianity to the island.

St Monica’s hostel used to be the missionary hospital and was built on top of former slave chambers. You can still see the tow remaining holding chambers where as many as 75 slaves with chains around their necks, lined together, lay side by side until either they died – and a lot did die – or they were taking out to the slave markets.

Outside, in the grounds of the Cathedral, is a chilling monument – a cluster of grey statues which commemorates the slave trade. Five bleak figures, placed in a rectangular pit, are shackled together with one of the original chains.

The Cathedral was deliberately built on the site of the old slave market, as an act of atonement for such a shameful pursuit. Directly in front of the alter is the exact spot where the whipping post once stood. Here, slaves were hipped. If they were strong enough o resist crying out, they were considered to be good merchandise and fit to be purchased. Round the alter, the contrasting red marble symbolises the blood fo the slaves. The font, at the back of the cathedral, marks the pit into which the dead slaves were pushed.

On a pillar beside the chancel is a crucifix, made from the tree that marked the place where the heart of Dr David Livingstone, the Scottish missionary and explorer (1813 – 1873), was buried in Zambia. A stained glass window above the altar commemorates the British sailors who died on anti-slavery patrols.

The foundation stone for the Cathedral was laid on Christmas Day, in 1873, the year the slave market closed. The first service was celebrated by the missionary Bishop, Dr Edward Steere, on Christmas Day 1877.

Our hosts looked after us well. The Mothers’ Union prepared most of our meals and we were taken out on many very enjoyable trips, usually ending up with a cooling dip in the Indian Ocean from one of the many lovely picturesque white sandy beaches, fringed with palm trees. 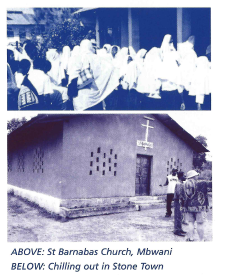 On one such trip, we experienced first hand just how difficult it can sometimes be for Christians in Zanzibar. At a police checkpoint, James, our guide, was arrested for failing to have the correct papers. It is a serious offence for a tourist guide to be without the proper documentarian. His argument that we were all Christian friends did not cut any ice with the policeman. It was only after John Inge returned to the Cathedral to obtain a piece of paper stamped and signed by the Diocesan Secretary, that James was released.

One of our most memorable trips was a visit to the Jocazzi forest where w saw Colobus monkeys at very close quarters. On this trip we also met a farmer who is benefiting from a project funded by the Cathedral. He was given a goat, which he keeps for breeding and milk. The first female kid to be born is then passed on to another farmer, who in turn passes on this first female kid to another neighbour, enabling farmers to build up their stock.

There are no Christian schools on the island. The schools operate a shift system on education stints because there are too few schools for them to attend all day. The children have to learn the Koran.

Because education is difficult for Christians in Zanzibar, people from Ely Diocese are now sponsoring nearly 40 children. With the help of this sponsorship, Christian parents are able to send their children to a Christian secondary school on the Tanzanian mainland, where the education is of a better quality and more appropriate. If you would like to sponsor a child’s education, please contact john.inge@ely.anglican.org

It was truly wonderful to come to this lovely island, not merely as tourists, but as guests who could worship with and were so warmly welcomed by the Christian community. It was a privilege to have the opportunity to contribute in some practical way to their work and witness.

Ely Cathedral has been twinned with Christ Church Cathedral, Zanzibar for several years. I shall always remember this Anglican place of worship as a towering symbol of redemption, a testimonial that good can come out of evil.