The following appeared in Cambridge Evening News on 21 August 1998. 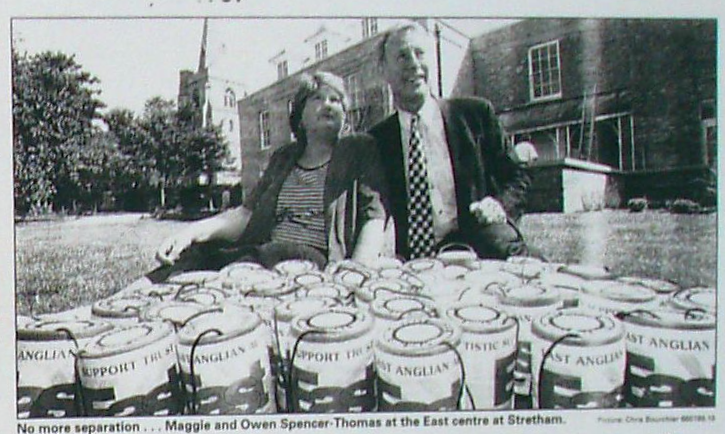 Until now, Cambridgeshire has not been able to offer adults with autism a home of their own and some families have had to travel hundreds of miles to see relatives. But Juniper House, in Stretham, the county’s first home for adults with autism, is about to reopen its doors – after a remarkable campaign.

Living together as a family is something most of us take for granted. But some children and young adults with severe autism cannot live in the family home because they need specialist care and support.

Not being able to live with your own child is bad enough, but imagine having to travel hundreds of miles every time you want to see them.

Owen and Maggie Spencer-Thomas, chairman and secretary of the charity, East Anglian Autistic Support trust (EAST), are familiar with this scenario.

They live in Cambridge and their son, Huw, is 19 and severely autistic. He has been living at Broomhayes School, in Bideford, Devon, for the past 10 years and his parents, sister Meg, 18, and brother Gwyn, 14, make the 500 mile round trip to see him as often as they can.

It’s meant that parents and children, and parents of adult children, are separated by hundreds of miles and contact is difficult and infrequent.”

But this is about to change. Due to the fund-raising efforts of EAST and the thousands of people who have supported the charity, Stretham Rectory, near Ely, has been converted into Juniper House, the county’s first home for adults with autism.

For Owen and Maggie, seven years of tireless fund-raising, giving up their living room to make way for EAST’s HQ and continually shelving weekends and holidays have paid off.

EAST has raised £350,000 towards the costs of acquiring and renovating Juniper House, a £1 million project funded by a partnership between EAST, Hereward Housing Association and five district and city councils, including east Cambridgeshire, south Cambridgeshire, Huntingdonshire, Fenland and Cambridge.

There are at least 140 families in the area who we know that have a child with autism.” said Owen. “There is also a problem when children become adults, because funding for education stops at 19, but support is needed for life.

It’s like giving a blind person a guide dog to explore the world and then, when they reach 19, taking the dog back. That would never happen, but it does for people with autism.” 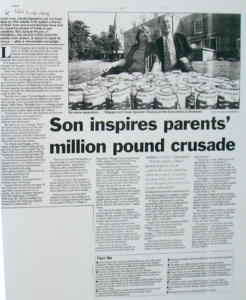 Owen is an ex-journalist with Anglia Television, was Chaplain at St John’s College School and begins a new post at Christ’s College in September. Maggie has just graduated with a degree in Social Policy from Anglia Polytechnic University.

It would be lovely to have Huw in the area and be together more as a family,” said Maggie. “We all go to see Huw during half-terms and holidays and either Owen or myself travel to see him every other month. But, if there is only one of us, we can’t take him out because that needs two people.”

Owen and Maggie hope, at some point, to have Huw living in the county. “Plans are already underway to open a satellite unit to Juniper House in a neighbouring village, for an additional two to three people, and we hope Huw will be there in the near future,” added Owen.

The National Autistic Society is overseeing the moving of residents in Juniper House and priority will be given to autistic adults from Cambridgeshire and the surrounding counties.

We chose Juniper House as the name after a 13th century monk in Italy who was the first person to be identified with autism,” said Owen. “We are having a tapestry of him made for the entrance hall and at the public open day next Wednesday visitors will be invited to add a stitch to the design.”

Owen says the spirit of the community in Stretham towards the home is good and he thinks this has been encouraged by a number of public meetings held with people in the area.

“It’s like giving a blind person a guide dog to explore the world and then, when they reach 19, taking the dog back. That would never happen, but it does for people with autism.”

It was an opportunity to tell the community what we were doing and for them to ask questions. Some were pretty blunt, like are our children going to be safe? People don’t know what to expect, but when you’re upfront and honest right at the beginning, people know what it is all about.”

Support for the fund-raising activities over the years has, says Owen and Maggie, been overwhelming.

Owen says that there are afar too many people and groups that have helped to mention but he names pillars of support that have been there form the start.

Our local church, which is part of the Parish of the Ascension in Cambridge, is a core group of 100 people who have always been with us.

And my parents, Ivor and Rosabel, who are in their nineties now, have also been absolutely wonderful in all of this.”

The bright and spacious surrounds of Juniper House, a Grade II listed building, is a long way off EAST’s humble beginnings in the Spencer-Thomas’ living room, where the charity was formed back in 1991.

Owen and Maggie are both looking forward to having their front room back as part of the family home. But both speak only positively of their fund-raising experience with EAST, which they plan to continue.

Having an autistic child is a privilege because it enables you to do things that you otherwise might not have ever done,” said Owen. “And you really get to see the best of people.”

If anyone feels they have lost faith in human nature, they should just come and do my job,”

Next Wednesday (August 20) Juniper House opens its doors to the public. Anyone who would like to take a closer look at the project is invited to drop between 2pm and 8pm. Juniper House, on the High Street, Stretham, can be contacted on (01353) 648797.