The following article appeared in Cambridge Evening News on 16 June 1997.

It was written by journalist, Ellee Seymour. 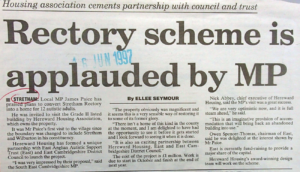 He was invited to visit the Grade II listed building by Hereward Housing Association, which owns the property.

It was Mr Paice’s first visit to the village since the boundary was changed to include Stretham and Wilburton in his constituency.

“I was very impressed by their proposal,” said the South East Cambridgeshire MP.

“The property obviously was magnificent and it seems this is a very sensible way of restoring it to some of its former glory.

“There isn’t a home of this kind in the county at the moment, and I am delighted to have had the opportunity to see it before it gets started and I look forward to seeing it when it is done.

“It is also an exciting partnership between Hereward Housing, East and East Cambridgeshire District Council,”.

The cost of the project is £1 million. Work is due to start in October and finish at the end of the next year.

“We are very optimistic now, and it is full steam ahead,” he said.

“This is an imaginative provision of accommodation that will bring back an abandoned building into use.”

Owen Spencer-Thomas, chairman of East, said he was delighted at the interest shown by Mr Paice.

East is currently fund-raising to provide a major share of the capital.

Hereward Housing’s award-winning design team will work on the scheme.