Princess drops by to plant a juniper

The following appeared in Cambridge Evening News on 20 September 2001. 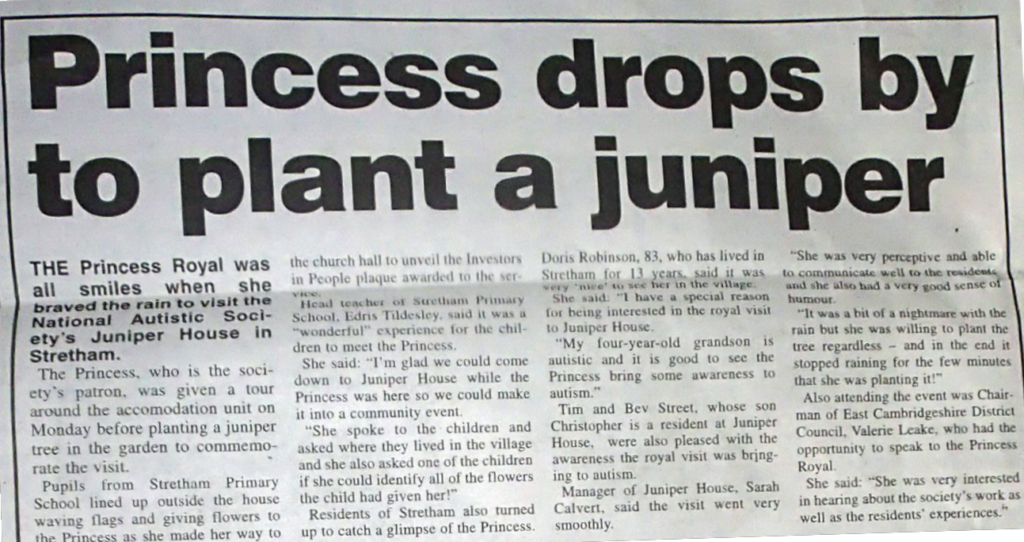 The Princess Royal was all smiles when she braved the rain to visit the National Autistic Society’s Juniper House in Stretham.

The Princess, who is the society’s patron, was given a tour around the accommodation unit on Monday before planting a juniper tree in the garden to commemorate the visit.

Pupils from Stretham Primary School lined up outside the house waving flags and giving flowers to the Princess as she made her way to the church hall to unveil the Investors in People plaque awarded to the service.

Head Teacher of Stretham Primary School, Edris Tildersley, said it was a wonderful experience for the children to meet the Princess.

She said, “I’m glad we could come down to Juniper House while the Princess was here so we could make it into a community event.

“She spoke to the children and asked where they lived in the village and she also asked one of the children if she could identify all of the flowers the child had given her!”

Residents of Stretham also turned up to catch a glimpse of the Princess.

Doris Robinson, 83, who has lived in Stretham for 13 years, said it was very “nice” to see her in the village.

She said, “I have a special reason for being interested in the royal visit to Juniper House.

“My four-year-old grandson is autistic and it is good to see the Princess bring some awareness to autism.”

Tim and Bev Street, whose son Christopher is a resident at Juniper House, were also pleased with the awareness the royal visit was bringing to autism.

“She was very perceptive and able to communicate well to the residents and she also had a very good sense of humour.

“It was a bit of a nightmare with the rain but she was willing to plant the tree regardless – and in the end it stopped raining for the few minutes that she was planting it!”

Also attending the event was Chairman of East Cambridgeshire District Council, Valarie Leake, who had the opportunity to speak to the Princess Royal.

She said: “She was very interested in hearing about the society’s work as well as the residents’ experiences.”