The 10th Anniversary Sawston Fun Run was a huge success as these articles confirm. 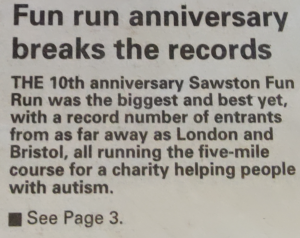 The 10th Anniversary Sawston Fun Run was the biggest and best yet, with a record number of entrants from as far away as London and Bristol, all running the five-mile course for a charity helping people with autism.

This is the article that appeared on page 3 of the Cambridge Evening News. 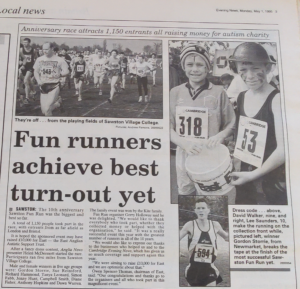 The 10th anniversary Sawston Fun Run was the biggest and best so far.

A total of 1,150 people took part in the race, with entrants from as far afield as London and Bristol.

It is hoped the sponsored event may have raised £10,000 for EAST – the East Anglian Autistic Support Trust.

The family event was won by the Kite family.

Fun Run organiser, Gerry Holloway, said he was delighted. “We would like to thank everybody who took part, whether they collected money or helped with the organisation,” he said. “It was a really successful event this year with the greatest number o runners in all of the 10 years.

“We would also like to express our thanks to the businesses who helped us and to the Cambridge Evening News, which has given us so much coverage and support again this year.

Owen Spencer-Thomas, chairman of EAST, said: “Our congratulations and thanks go to the organisers and all who took part in this magnificent event.”