This article appeared in the Cambridge Evening News in March 1995.

Happy birthday to the Sawston Fun Run! the annual village charity race is being run for the 10th year on April 30 to raise money for young people with autism.

Sawston Village College pupils told School’s Out about the run, about the charity that will benefit and how you can join in the fun. 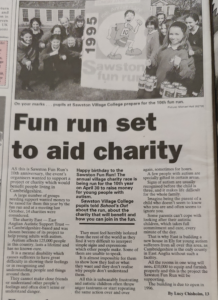 As this is Sawston Fun Run’s 10th anniversary, the event’s organisers wanted to support a project or charity which would benefit people living in Cambridgeshire.

A large number of groups needing support wanted money to be raised for them this year by the fun run and at a meeting last October, 14 charities were considered.

The charity EAST – East Anglian Autistic Support Trust – is Cambridgeshire-based and was chosen because of its project to help young adults with autism.

Autism affects 125,000 people in this country, lasts a lifetime and has no known cure.

It is a mental disability which causes sufferers to have great difficulty in showing their feelings or in recognising and understanding people and things around them.

They must feel horribly isolated from the rest of the world as they find it very difficult to interpret simple signs and expressions which other people make. Some of then are unable to speak.

It is almost impossible for them to show how they feel or what they want and they don’t realise why people don’t understand them.

All this is unbearably frustrating and autistic children often throw anger tantrums or start repeating the same action over and over again, sometimes for hours.

A few people with autism are specially gifted in certain areas.

Signs of autism are usually recognised before the child is three, and it makes life difficult for the whole family.

Imagine being the parent of a child who doesn’t seem to know who you are and often seems to ignore you.

Some parents can’t cope with looking after their autistic children, which takes full commitment and care, every minute of the day.

That is why EAST is building a new house in Ely for young autism sufferers from all over this area, as Cambridgeshire is the only county in East Anglia without such a facility.

All the rooms in one wing will need £10,000 to equip and furnish properly and this is the project the Sawston Fun Run will be supporting.