The following article, written by Sue Elliott, appeared in the Cambridge Evening News on 24 February on page 16. 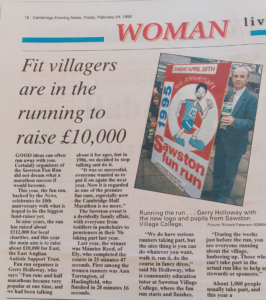 Good ideas can often run away with you.

Certainly organisers of the Sawston Fun Run did not dream what a marathon success it would become.

This year, the fun run, backed by the News, celebrates its 10th anniversary with what is hoped to be the biggest fund-raiser yet.

In nine years, the run has raised £112,000 for local charities and this year the main aim is to raise about £10,000 for EAST, the East Anglian Autistic Support Trust.

Fun run organiser is Gerry Holloway, who says, “Fun runs and half marathons became very popular at one time, and we had been talking about it for ages, but in 1986, we decided to stop talking and do it.

“It was so successful, everyone wanted us to put it on again the next year. Now it is regarded as one of the premier fun runs, especially now the Cambridge Half Marathon is no more.”

The Sawston event is a decidedly family affair, with everyone from toddlers in pushchairs to pensioners in their 70s taking part last year.

Last year, the winner was Maurice Reed, of Ely, who completed the course in 25 minutes 47 seconds.  First among the women runners was Ann Turrington, of Haslingfield, who finished in 28 minutes 16 seconds.

“We do have serious runners taking part, but the nice think is you can do whatever you want, walk it, run it, do the course in fancy dress,” said Mr Holloway, who is community education tutor at Sawston Village College, where the fun run starts and finishes.

“During the weeks just before the run, you see everyone running about the village, limbering up. Those who can’t take part in the actual run like to help as stewards or sponsors.”

About 1,000 people usually take part, and this year a commemorative medal will be given to each entrant to mark the 10th anniversary, paid for by the main sponsors, Cambridge Building Society.

“We would really be grateful to hear from other firms who might like to donate something for the spot prizes on the day, or are hoping to do something for charity in the near future and would like to contribute or enter a team,” he said.

A new red and white logo has also been designed by a former pupil at the village college, James Reed, who is now on a degree course but still lives in Sawston.