George Herbert is considered one of the finest Christian poets. Also remembered for his popular hymns, he was reputedly the most skilful and important devotional lyricist of his time. He studied in Cambridge and later became an Anglican priest and pastor. He was associated with the village of Leighton Bromswold in Cambridgeshire. Latterly, he became rector of Bemerton, near Salisbury.

George Herbert was born into an artistic and wealthy family in Montgomery, Wales, in 1593,  He was one of ten children, but at the age of three his father died. His mother moved the family to England, where she became a patron of the poet and clergyman, John Donne.

Herbert received a good education that later led to his holding prominent positions at Cambridge University and in Parliament.

He studied at Westminster School and soon began to display his own gift for poetry. After this, he went on to Trinity College, Cambridge, where he excelled in languages and music. He earned his bachelor’s degree in 1613 and his master’s degree three years later.

His early ambition was to become a priest, but his scholarship attracted the attention of King James I. In 1620 he was appointed University Orator. His duties included welcoming distinguished visitors and acting as a sort of an ambassador for the school, writing and delivering speeches to the King.

He seemed destined for a career as a courtier and served in Parliament for two years. But after the King’s death, a friend encouraged him to renew his interest in ordained ministry.  As a consequence, he sought ordination – an unusual step for a man of his rank and family background. He was first made deacon and in 1626 appointed a canon of Lincoln Cathedral.

His mother died in 1627.  He expressed his grief in verse, penning several poems in tribute to her. Herbert also resigned his post at Cambridge that same year. He married Jane Danvers in 1629.

His cathedral canonry was associated with the parish of Leighton Bromswold in Cambridgeshire, then in the diocese of Lincoln.  Although he had no duties there, he soon discovered that the 13th century church was in ruins.  So, he set about raising money and restoring it.

Interestingly, Herbert’s theological position is evident in the building’s carpentry.  The twin oak pulpits, on each side of the chancel arch, are perhaps his most telling gift.

He intended that one should function as a pulpit and the other as a prayer desk – each with equal prominence. Between the two, a very low screen separates the chancel from the nave of the church.

Herbert believed it was equally important to pray as well as to preach.  St Mary’s, Leighton Bromswold, stands today as a physical parallel to his poetry and theology.

The church’s restoration indicates his preference for proper, but reformed ceremonial, and the balance between preaching and sacrament.  Thus, he marked out a middle ground between conflicting doctrines – a position which came to be seen as quintessentially Anglican. 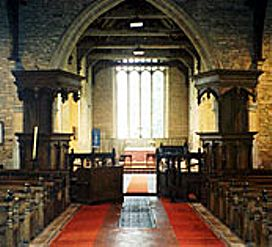 In 1630 Herbert became rector of Bemerton, close to his family seat at Wilton, near Salisbury.  Despite his failing health he ministered diligently.

While dying from tuberculosis, he sent a collection of his poems to his Cambridge friend Nicholas Ferrar.  Ferrar had founded an Anglican community at Little Gidding – just two miles away from Leighton Bromswold.

Herbert instructed his friend to publish the poems if he thought they might “turn to the advantage of any dejected poor soul”.  Otherwise he was to burn them.

Herbert died in 1633.  But Ferrar edited the manuscripts for publication, ensuring Herbert’s fame as a theological poet and hymn writer.

Altogether Herbert wrote over 160 poems and a book on practical advice for rural clergy called The Country Parson. He also gathered together a number of witty sayings under the title Outlandish Proverbs.

His popular hymns include The God of Love My Shepherd Is, King of Glory, and Teach me, my God and King.

The Church of England commemorates George Herbert’s death on 27th February.  Dr Rowan Williams, who has written extensively on Herbert’s poetry, chose the same date for his enthronement as Archbishop of Canterbury in 2003.