Chaplain to air thoughts on Radio 2

The following article appeared in the Cambridge Evening News
It was written by journalist, Stephen Blease.  Picture taken by Keith Jones.

A Cambridge University chaplain will be making his Radio 2 debut this week.

The Rev Owen Spencer-Thomas, the chaplain of Christ’s College, will be the guest speaker on Pause for Thought, to be broadcast at 1.30am and 3.30am on Wednesday. 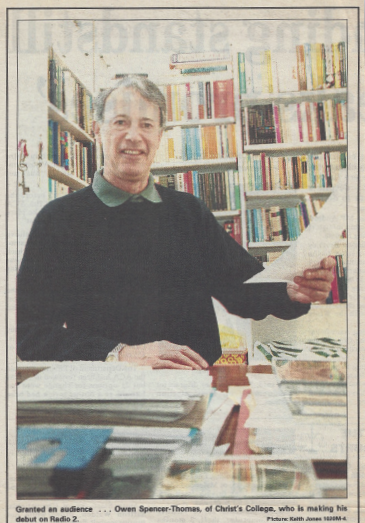 On Saturday, March 11, he will be appearing on Radio 2 gain to present a weekend series of talks broadcast at 11.30pm and repeated on Sunday morning at 6.15am.

Some of the topics he will be speaking about include “Against all odds – how people overcome their greatest fears”, “How Mother’s Day came about” and “Learning from others”.

Mr Spencer-Thomas has been a chaplain for five years, serving at St John’s College School from 1995 until 1998, when he moved to Christ’s College.

But he is no stranger to broadcasting. Although ordained in 1972, he worked as a news reporter for Anglia Television from 1975 to 1995, and contributed to Anglia News and About Anglia. He also presented the late night programme Reflections.

However, he said: “Radio 2 is a new one for me and obviously the style is very different. You have got to be quite skilful with it.

“I’m trying to put over some fairly abstract and new ideas in the form of a story or real-life experience.”

The Pause for Thought programmes go out in the early hours of the morning and Mr Spencer-Thomas said: “You have got to make the subject come alive for shift workers, insomniacs and others who happen to be up at that time.

“An awful lot of people keep unusual hours and listen to Radio 2 at that time.”

He added: “It is a great privilege to be asked to do this and I’m very much looking forward to it.”